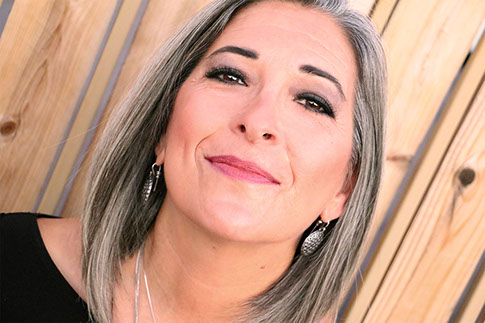 I am often asked "How did you get started doing  Makeup"?

I was studying to be an Architect, a longtime dream and passion. I had a diploma and a 2 year certification in commercial art at age 17 but I was very young, and even younger looking.

My 3 older sisters owned a hair salon in Phoenix. The oldest sister encouraged me to go cosmetology school in my last year of high school as a way to help me work my way through college. She assured me it would be great to have that license as something to fall back on. Hairstyling or salons were not my thing at all. I wanted to play with Texture and Color, Textiles, Line Design and Balance. Being so young looking meant that no one was taking me serious in my mechanical drawing class, so I enrolled in cosmetology school as a short term plan.

By September of 1978 I had my state license and began to work in the family salon. But only for a moment, as I was waiting my turn for a Makeup position soon to open at a famous salon “ With Love, B’anne".

“It was the vehicle that helped me arrive.” Going to beauty school that is. I met the owner, B’anne in school. She was getting her license as well. She was a Makeup Artist, Chemist, a Biologist and a stunning Black & White model in the 60’s. Her biggest gift though was the rare, special woman she was. I became a lot more interested in the art of makeup, and we had a special connection. She mentored me in school and helped to launch my career.

By 1980 I had joined her salon as a second makeup artist. We began to excel through the 80’s and early 90’s. We did Black & White photos cards and wall photos of all the staff, which grew to over 70 people. Most of the local TV anchors were clients, as well as the “very connected” in town. We began to get a lot of recognition in magazines and as 1 of 2 makeup artists I began to do a lot of production work, mainly print or video at first. We worked with the top modeling agency and were the team on the renowned high end fashion shows throughout the valley. We also developed and formulated our own line of cosmetics, skin and hair care products. We had a custom blended line of makeup and a makeup bar; the first of its kind! I operated that area and oversaw staff as well and helped produce our semiannual magazine.  We promoted a post-operative makeup program and worked closely with many doctors. We were always behind a camera either shooting for the city or our own monthly promotions and our product line catalog.

I connected with a few local production companies in the late 80’s and sailed through the 90’s doing a large number of commercials and film work. After the salon closed in 1993, I became a freelance makeup artist and rented space for private makeup services. In 1998 I started my own makeup studio and line of custom blended products; “Palmina Leone, Concept Cosmetics” in central Phoenix, duplicating the success we had at With Love, B’anne.

I stay grounded in the central Phoenix area with a lot of history, experience and clientele. I remain a professional makeup artist, hardworking and detailed, both in my studio and on location.

Time has flown by.  I still look and feel young,  but will celebrate 40 years in the industry soon and I’m rejoicing by gearing up….new ideas, marketing, new web site and, hopefully soon, a much needed makeup school, as I would like to give back the gift I received in 1977 and leave the industry as a mentor as well.

In the meantime….as you will see by my resume and photos throughout this web site, I have been very busy. I remain ready to work, still have a lot of current creativity and desire to be a team player, create or follow a concept. Rates are listed.

Although I did not become the Architect or Designer I thought I would, I did find my path using the theory of Texture and Color, Line Design and Balance, custom mixing color and products, and have been designing faces, styling or creating looks instead!

( AKA for some years; Makeup Mary and  Billups or Fennello)